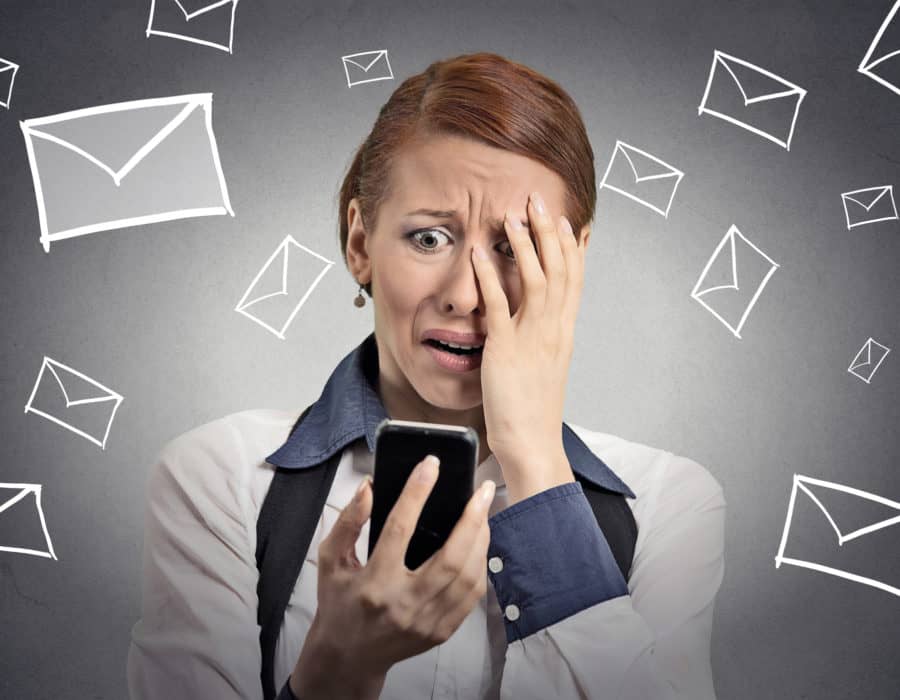 How many emails do you have in your inbox? Don’t ask me that question. I plead the Fifth. All I will say is that yes, I currently am in possession of an overloaded inbox.

A recent survey by Adobe reveals that 24% of Americans believe that the idea of a “zero inbox” is an impossibility.

I have to admit that I am one of them. My goal is to keep my inbox under 100. Right now, it’s not going so well.

Apparently, there are three types of us when it comes to managing email: the Deleters, the Savers, and the Ignorers.

If you belong to either of the latter camps, here are a few tips to help you get out from under the burden of an overloaded inbox.

It’s An Inbox – Not A Storage Box

I worked at a global nonprofit several years ago with a full IT Department. Our head IT guy was relentless about us keeping our inboxes under a certain max limit. He showed up in the marketing department a lot. With so many large graphic files being sent and received, we got our share of scolding. I can still hear his voice in my head – “Email is not for storage!”

Starting today, stop using your inbox as a storage.

Try to read an email just once, when possible, act on it immediately and delete it. If the email is part of an ongoing project, use the features of your inbox to file it in a project-specific folder or archive it.

Do this with new emails every day this week. Then do it again next week. You’ll begin to form a habit and before you know it, it will be just the way you do business.

Now – what about that mountain of “saved” emails – the ones that have pushed your total number into the triple or…ahem…quadruple digits?

You’re going to get rid of them.

Whether you realize it or not, that mountain of stored emails is causing you stress. It’s the virtual equivalent of a giant pile of mail stacking up on your desk. And I know you don’t need more of that in your life.

I also recognize that getting rid of them might cause you stress. But, it’s going to be ok. You can do this. And it’s not going to be the end of the world.

About two years ago, I was trying to do something on my computer that I should have left to a professional and POOF! all of my emails disappeared – every single one of them! You know what? I survived. And the truth is, aside from a few emails I had to ask clients to re-send, I didn’t miss anything.

In a way, I was lucky. I didn’t have to make any decisions. My overloaded inbox problem was solved for me.

If you have a lot of emails to delete, it may get a little cumbersome. You can make it a little easier by first, setting a goal of how many emails you want in your inbox, then using a sort and delete method to get to that goal.

When I approach a mass email purge, I sort my inbox by sender. Go for the low-hanging fruit first, picking off promotional emails, and communication on projects long expired. Focus on one sender at a time and delete as much as you can from that sender, then move on to the next sender.

Don’t try to do it all in one sitting. Do it a little at a time – one sender a day, five minutes a day, a certain number of emails a day – whatever works for you, prevents you from getting bored and/or overwhelmed and keeps you moving forward toward your ultimate goal of saying goodbye to an overloaded inbox for good.

We've all heard about the power of positive thinking, but this one was new to us. Did you know that positivity can increase productivity? You can use optimism to battle … END_OF_DOCUMENT_TOKEN_TO_BE_REPLACED

Online professional networking platforms like LinkedIn are great, we highly recommend them. But there's something to be said for going "old school" once in a while. Reach … END_OF_DOCUMENT_TOKEN_TO_BE_REPLACED

An often overlooked feature on LinkedIn is the cover image on your profile. That's the horizontal image behind your round profile photo. It's valuable marketing real estate … END_OF_DOCUMENT_TOKEN_TO_BE_REPLACED